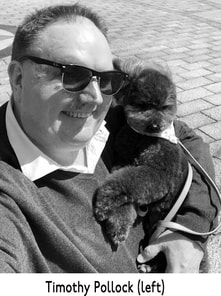 ​Timothy W. Pollock currently lectures on film and visual culture at Osaka Kyoiku University and at Hagoromo University of International Studies, Japan. He received his BA in Religious Studies from the College of William & Mary, USA, and an MA in Applied Linguistics from Monash University, Australia. He has presented papers in fields as diverse as film, semiotic theory, ethics and education, all of which were structured around the central theme of the power of multi-modal, dramatic visual narratives.

In ethics and moral philosophy he has analyzed how ethical dilemmas are presented in contemporary Hollywood cinema, and how the presentation of these dilemmas within a dramatic, visual narrative influences our reading of them. He is currently investigating how the very modes and frameworks through which ethical dilemmas are communicated can subtly influence the deliberative process of the target audience.

A long-time resident of Japan, he is also a tireless advocate for the need to include film studies and courses on visual literacy in the general education requirements at Japanese universities, which are sorely lacking in these fields.